Print Email to Friends Google Bookmarks
Rss
移動人權線上論壇：當新住民在國慶典禮上領唱國歌之後 Webinar Meeting : So What Happens After New Immigrants Started to Lead the Singing of the National Anthem at Taiwan’s National Day Celebrations?
April 08, 2021 By FIHRM-AP

The national anthem singing at the 2019 New Year's Day flag-raising ceremony was entirely led new immigrants. Despite that such a significantly symbolic milestone was achieved, has the rights of immigrants in Taiwan really measured up to the diversity and equality image suggested by the ceremony? And has that line drawn between us and them disappeared because of this? This talk will explore "overseas interview for citizens of selected 21 countries," the starting point of a series rules governing cross-national marriage and the relaxation and tightening of regulation in the process of Nationality Act revision. The review will give an insight into the border control measures imposed on marriage migrants by the Taiwanese legal system. The logic of these control measures is rooted in the discrepancies of economic development and capital and have formed discrimination of class and ethnicity against migrants from spefic countries. Under the disguise of seemingly sensible and legal rationale, the combination of discrimination and policies leads to the imposition of social control on the vulnerable and exacerbates the demarcation between the "superior us" and the "inferior other" in the name of safeguarding national security and social norm.

I was raised in a time when geography textbooks still referred to the entirety of Southeast Asian countries as "Indochina Peninsula". Despite hitting only the minimum passing scores at the history and geography tests for my university entrance exam, I have developed a deep fondness of Asian history and geography ever since joining TIFA. The experience showed me that national boundaries are often made up and they are merely lines drawn by people. 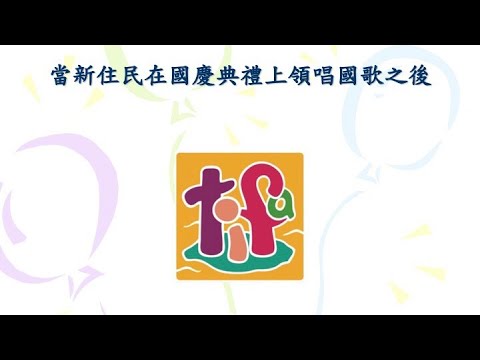 So What Happens After New Immigrants Started to Lead the Singing of the National Anthem at Taiwan’s National Day Celebrations?